The eerie life of fam. FRESIC.

possible with the support of:

enter each room for details (sound on): 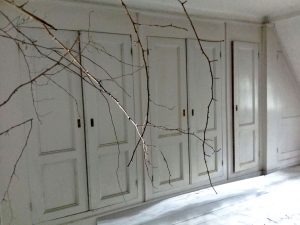 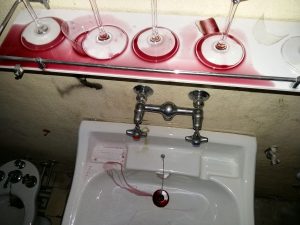 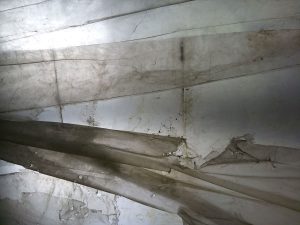 Site-specific work done in the frame of the group exhibition „In-between worlds” in an abandoned Villa in the 14th district of Vienna (now undergoing remodeling constructions into luxurious apartments). The interaction with the house started from the premises of it being a living organism. The working manifested itself in different places in the house, through the appearance of ‘traces’ from lives of the imaginary characters Ms. Fresic and her partner. The awareness of two inhabitants act as anchor points for the viewer, as well as bringing discourses on the domestic critically into question. However, there was minimal interference with the given space, and only specific areas were manipulated  into a ‘window’ of the past /future. The separate levels of the house are integrated conceptually into the work as consciousness stages.

As one walked through the house, the name FRESIC become visible as ‚Fischer ‘, one of the last persons to live there. Frau Fischer feeds her cats at regular hours each day, every day. She left the house, but returns ghostly to feed the cats which have not. Left. Yet, in the eerie life of fam. FRESIC, Frau F. is not the same. She is imaginary, she is a projection, she is a double. She has lived there, no doubt, for traces have been left enough.

The kitchen: an uncanny combination of a nature morte painting with the smell of a freshly baked cake, that the out of use oven exhales. Snail shells flood the bewildered garden and occupy a prominent space on the otherwise empty kitchen shelves.  The beauty room: a broken reality of nature and saints. The bathroom, who’s teenage like stickers on the walls tell us it was the place where Ms F. liked to drink her dry vermouth. The same bathtub becomes the end for small animals who became trapped in it (see ‚nature morte ‘photos).  The bathtub /shower cabin as topos for death is a recurring cinematic pop-cultural refrain. The basement (Keller), a moist room entangled in dark. A ghostly white stove beautiful as ice, sings bird’s spring songs, and lets steps chasing in the moldy air you breath in your lungs. You want to leave, but just as you hold your breath ‘honey I’m home’ engages you back. The eerie life of Fam Fresic.